All information in the IAS is distributed via computer networks to minimise cabling. The figure above shows an example of an integrated system. As indicated in the figure, the IAS can be seamlessly integrated with other ship systems, e.g. The Navigation Bridge systems.

The IAS is based on standard industrial off-the-shelf computer hardware and software from vendors with worldwide support. To optimise system maintenance and spare part logistics, the system components will be standardised to few variants.

Advanced Control delivers systems according to rules of the leading classification authorities, including:

The system is designed to be as self-explanatory and easy to operate as possible for relevant personnel. All information is presented via graphical screens. The figure below shows an example of the screen layout. Pointing and clicking buttons and objects in the screen can reach all functions of the IAS-system. However, to speed up operation, some of the more important functions will also have shortcuts via a keyboard.

All alarm events are detected, logged and presented throughout the IAS. In the engine room, additional notifications for some selected alarms may be given by dedicated light signals and sound.Alarm can also be notified through an external alarm system (e.g. Paging system, wireless telephone system alternatively separate distributed alarm panels.)

A flexible duty/watch system can be integrated in the IAS. Dependant on the "on duty" selections, alarms will be notified on the relevant operator stations and individual units of the extended alarm system. If an alarm is not acknowledged within a given time, collective calls for the responsible alarm group are released on the external alarm system. Dead man functions for the engine room and the wheelhouse can be implemented as a part of the duty/watch system.

All systems associated with the main engine can be controlled and monitored by the IAS. Instrumentation for fuel oil, thermal oil, lubrication, cooling, fans etc. can be connected directly to the IAS, while systems like e.g. Engine remote control can be interfaced via serial links or dedicated networks.

All systems associated with the power generation and power distribution can be controlled and monitored by the IAS. 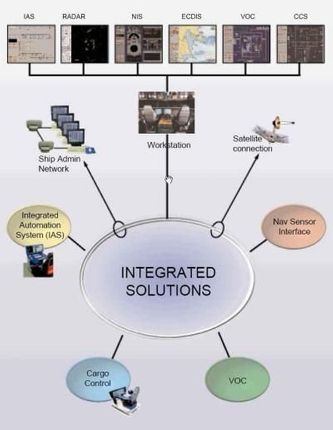 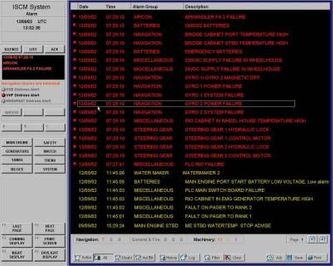 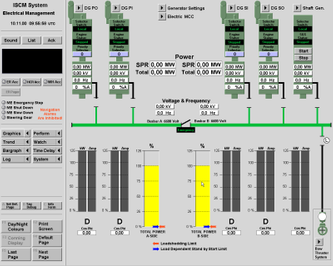